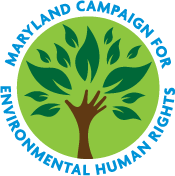 This edition of the MDEHR Campaign Update will cover the following topics:

The Maryland Campaign for Environmental Human Rights (MDEHR) is pleased to announce that Delegate Wanika Fisher is the lead House sponsor for the Environmental Human Rights (EHR) Amendment in the 2021 General Assembly.  We are in a moment when there is increased visibility on the inequities of systemic racism in all areas of life, including the systemic exposure to pollution of black and brown communities. Delegate Wanika Fisher represents district 47B in Prince George’s County and is an attorney, having served as the Assistant District Attorney in Prince George’s County in 2017. She is the Assistant Majority Leader in the House of Delegates and serves on the Judiciary Committee. She is a member of the Legislative Black Caucus and the Maryland Legislative Asian-American Pacific Islander Caucus.

The Environmental Human Rights (EHR) Amendment was submitted to Bill Drafting on October 30 in the House by Delegate Wanika Fisher and in the Senate by Senator Obie Patterson.  Senators and Delegates were encouraged to pre-file their bills for the 2021 General Assembly in light of the pandemic impacting next year’s session. The deadline to submit to Bill Drafting was November 1, 2020.

The amendment language has been simplified for the 2021 session. The amendment has two main points and uses language from the Maryland Environmental Policy Act (MEPA) which was approved by the General Assembly in 1973.

The University of Maryland Environmental Law Clinic is conducting a webinar about recent state activity on environmental justice law on Friday, November 6. The webinar focuses on two areas: (1) recent state environmental justice laws and (2) how the courts have interpreted different states’ approaches to environmental constitutional amendments. Two students in the clinic, Johanna Adashek, and George Rice share their research and provide insights and analysis on these two focus areas. A link to the recording will be posted at www.medhr.org/actions and on the MDEHR YouTube channel.

Working in collaboration with the Central Maryland Ecumenical Council and its members Green Grace, the environmental mission of the Episcopal Diocese of Maryland, and the DE-MD (ELCA) Lutheran Synod, the Maryland Campaign for Environmental Human Rights has been hosting a free, virtual 5-week training program on Environmental Justice. About 100 people from inter-faith communities and individuals interested in environmental justice, climate justice, and advocacy engaged in the opening session with Tamara Toles O’Laughlin who is the North American Director for 350.org and who spoke about the history of environmental justice and a shared framework for moving forward. Rebecca Rehr, the Director for the Climate Health Program for ecoAmerica led the second session about environmental health disparities and climate solutions based on equity and justice. In the fourth session, Brooke Harper, the Regional Campaign Strategist for 350.org talked about ways to engage as an advocate on climate justice issues and key climate issues in the upcoming 2021 session. For recordings of previous sessions, visit www.mdehr.org/ej-training-program or you can watch these sessions on the MDEHR YouTube channel here.

MDEHR can not do this work alone and we appreciate your support as we prepare to bring the environmental human rights amendment to the 2021 General Assembly.