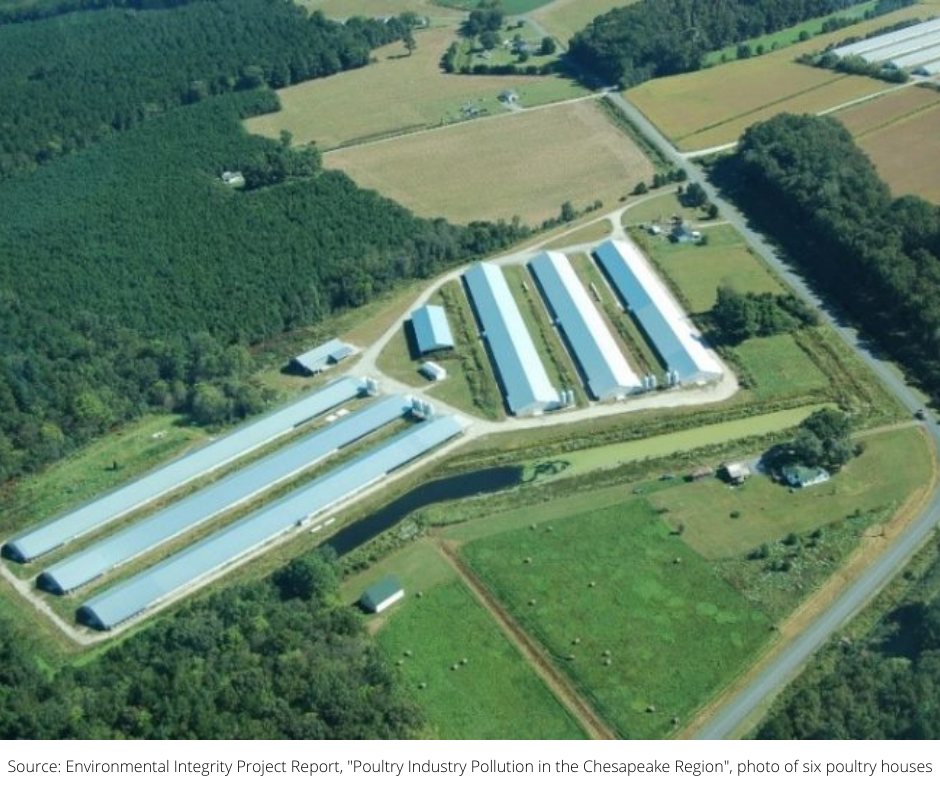 MDEHR featured a personal story last week from Monica Brooks who formed Concerned Citizens Against Industrial CAFOs (CCAIC) to fight the location of 13 industrial chicken houses (like the ones shown in the photo above) near her neighborhood in Wicomico County, Maryland.  CAFOs are concentrated animal feeding operations and are much more common now on the Eastern Shore of Maryland.

“Sam Berley and his wife Patricia live across the street from six industrial poultry houses which house 270,000 birds. Berley reports that the exhaust fans run day and night, blowing dust and pollutants onto his property. In addition to the offensive odors, their drinking water was contaminated so now they need to buy bottled water for cooking and drinking.” The Environmental Integrity Project (EIP) published a report called “Poultry Industry Pollution in the Chesapeake Region”, which featured this personal story from the Berley family who live on the Eastern Shore of Maryland. You can read the full report on the EIP website here.

Sam Berley and his wife are personally experiencing what Monica and her group were fighting — the reality of living next door to industrial poultry houses. According to the EIP report, “beyond just ammonia, poultry houses – which often house as many as 45,000 chickens at a time – can also release microscopic particles of manure and other pollutants, which can trigger asthma attacks. Researchers have found that airborne contaminants can pose a health risk to nearby residents.”

Contaminated drinking water is another concern. Maryland Matters reported that “two counties on Maryland’s Lower Eastern Shore, where there are hundreds of concentrated animal feeding operations (CAFOs), have unhealthy levels of nitrate in drinking water, which may lead to health problems such as blue baby syndrome, thyroid disease and pregnancy complications. More than a third of Wicomico and Worcester counties’ population, or at least 61,000 residents, may have been or are currently exposed to dangerous nitrate levels, according to a recent study by The Center for Progressive Reform. Furthermore, nitrate pollution in drinking water may be responsible for 12,500 cases of cancer per year in the US, as well as low birth rates and preterm births, according to a 2019 study from the Environmental Working Group.” You can read the Maryland Matters article here.

Next week, MDEHR will take a look at recent findings in CAFO industry regulation and how the environmental human rights amendment could help residents who live next door and downstream from these concentrated animal feeding operations (CAFOs).